For most Americans, Maine remains a bit of a mystery. Located way up there in the northeast, it’s a state full of wild adventure, roadside lobster shacks, and a few beach towns seemingly reserved for the “old money” families. Of course, that’s not all this stunning state has to offer. Below, we’ve highlighted 25 of the best overlooked attractions in Maine. 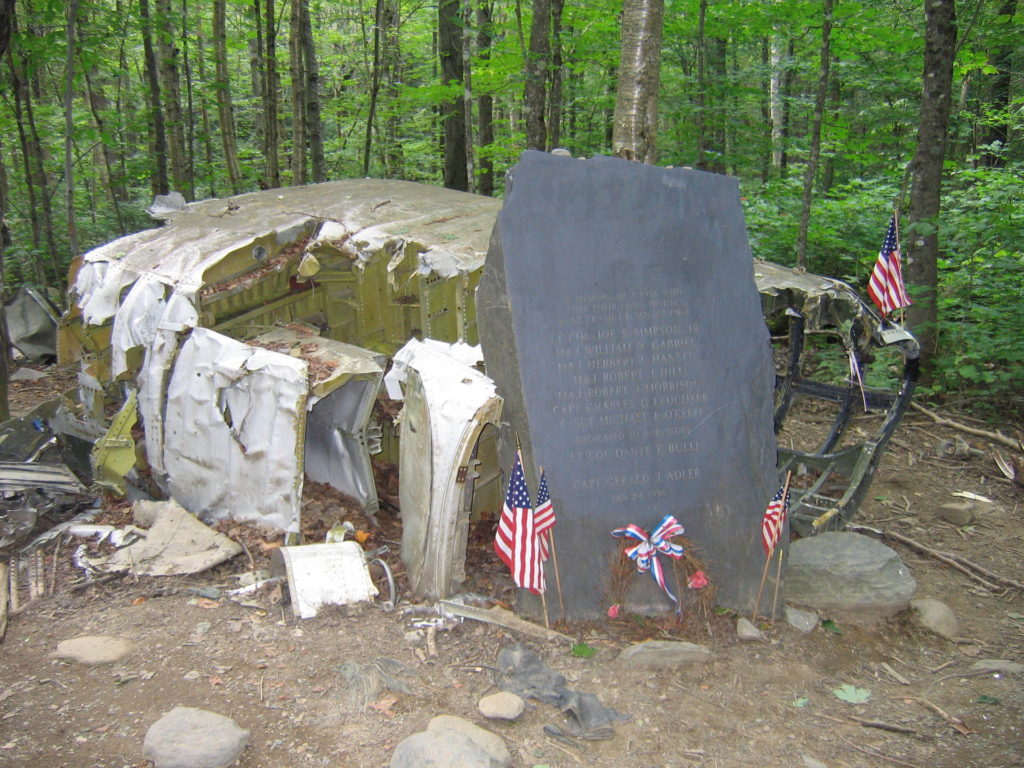 The B-52 Crash Site is surely one of the more unique places on our list of the most underrated attractions in Maine. Located near Elephant Mountain, which itself is about six miles from the town of Greenville, lies the remains of a U.S. Air Force Boeing B-52C Stratofortress. The plane crashed on January 24, 1963, killing seven of the plane’s nine crew members. The shredded fuselage is surprisingly fascinating to see, while the stone memorial that has been added to the site to commemorate the fallen soldiers is very touching. A mere half-mile hike is all that’s needed to reach the wreckage. 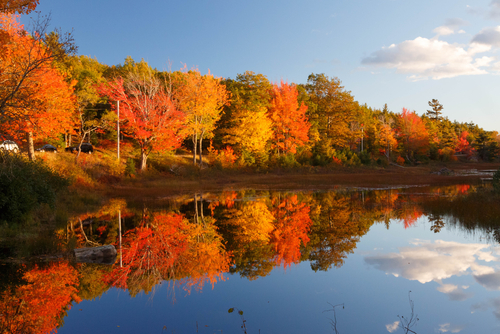 When it comes to fall color, there may be no place in Maine — yes, even Arcadia — that is more beautiful and colorful than the Belgrade Lakes Region. Though Belgrade Lakes is gorgeous and welcoming at any time of year, it’s certainly at its best in autumn, when the town’s Main Street is decked out in color and seasonal decor, and the trees almost look as if they are on fire. 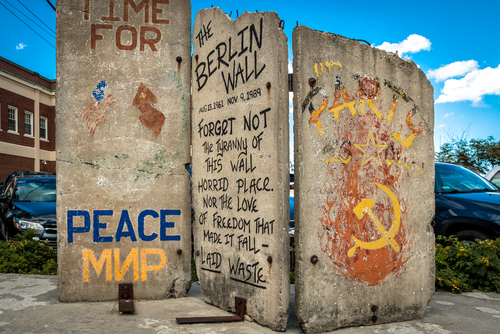 When the Berlin Wall was dismantled in 1989, its pieces were sent all over the world to remind different populations of the dangers associated with barriers both literal and figurative. Some of those pieces were sent to Portland, Maine, where they remain on Long Wharf, just across from Commercial Street. 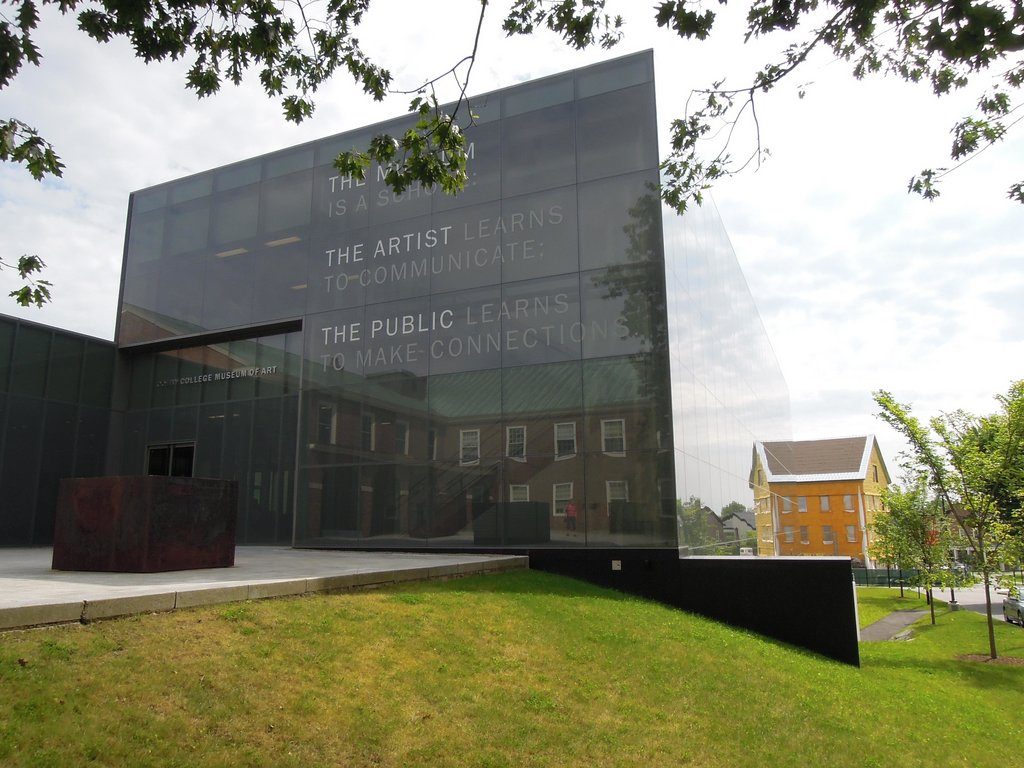 For a small college in a small town in Maine, Colby College boasts an extremely impressive art collection. Housed in the Colby College Museum of Art, the collection includes everything from sculptures, to arts and crafts, to paintings by artists like Georgia O’Keefe, Whistler, Winslow Homer, and Rembrandt, to name but a few. There’s usually an edgy political-themed exhibition on display, as well. 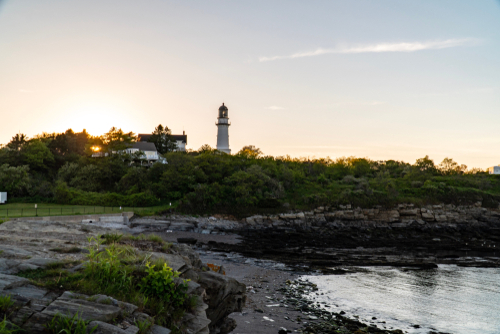 Despite being situated a mere 15 minutes from Maine’s largest city, Cape Elizabeth almost always feels like a remote location far off the beaten path. Book a room at Inn by the Sea, a small, yet luxurious hotel known for fostering and facilitating the adoption of local dogs in need of homes. Then head out to Crescent Beach State Park for a nice walk along one of Maine’s most beautiful coastal areas.

The Desert of Maine 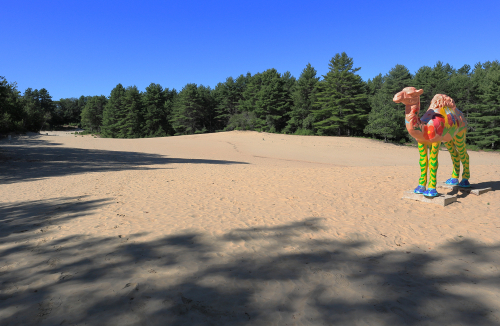 Maine may just be the greenest state in the entire nation, and yet it also has its very own desert. The Desert of Maine is 40 acres of sand that seems a strange reverse oasis in the land of lush pine trees. The plot was once successful potato farming land, but after it wasn’t rotated properly and then overgrazed, it became useless sand and silt. Now a roadside attraction, The Desert of Maine attracts visitors with its fiberglass camel, desert-worn debris-turned-artwork, and a sand museum. 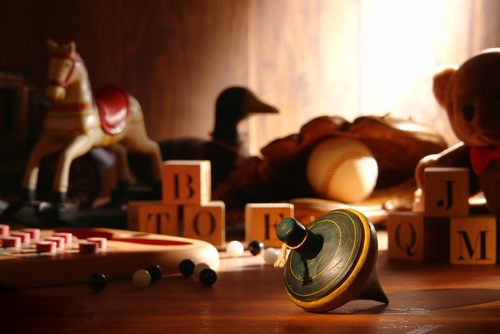 Fawcett’s Antique Toy and Art Museum is a one-of-a-kind attraction that is part museum, part nostalgic collection, and part toy store. Put together by John Fawcett, this place is a wonderland of old toys ranging from The Lone Ranger, to Popeye, to Felix the Cat, to Bimbo, Betty Boop’s canine boyfriend who was banned in 1933 for teetering on beastiality. An attached shop sells antique toys, though arguably, it’s the museum that’s the most impressive part.

Between Fort Kent and Portage 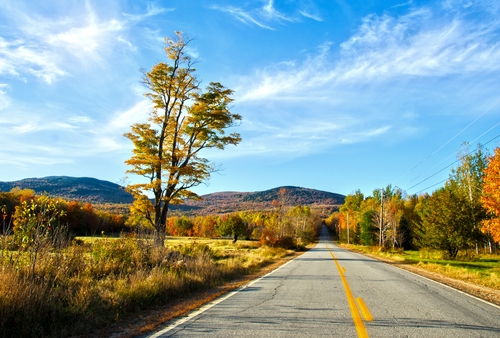 To witness some of Maine’s most beautiful natural scenery, head north for a drive along Route 11, perhaps better known as The Fish River Main Scenic Byway. Spanning 37 miles between the towns of Fort Kent and Portage, Route 11 boasts stunning views of Eagle Lake, Mt. Katahdin, and other natural wonders. If you have the time, be sure to stop at a few of the route’s points of interest, including: 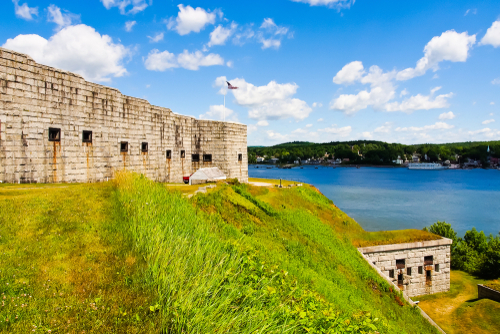 Stop by Fort Knox State Historic Site to see one of the best preserved forts in all of New England. The 19th-century granite fort is a fascinating example of military architecture, though it never actually experienced a battle. As you wander the grounds, be sure to climb to the various observation towers, each of which offers stunning views of the surrounding landscape. 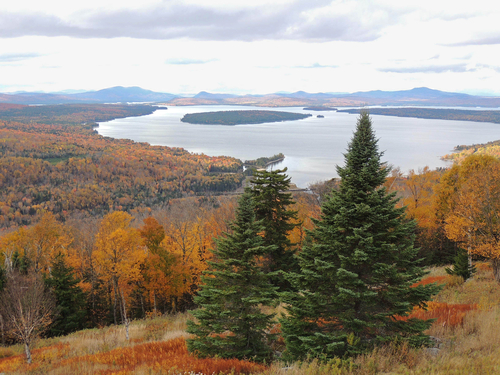 Given a Certificate of Excellence by TripAdvisor, Height of Land may hit the height of popularity soon. For now, it’s a relatively off-the-beaten path hiking destination known for its stunning panoramic views of the surrounding area. This is especially true in leaf peeping season, when visitors to Maine can avoid the crowds by heading here instead of the much more popular Acadia National Park. Height of Land is 512 acres located along the Rangeley Lakes National Scenic Byway. As part of the Appalachian Trail, there are plenty of hiking trails here for visitors to experience Maine’s beautiful natural landscape to its fullest. 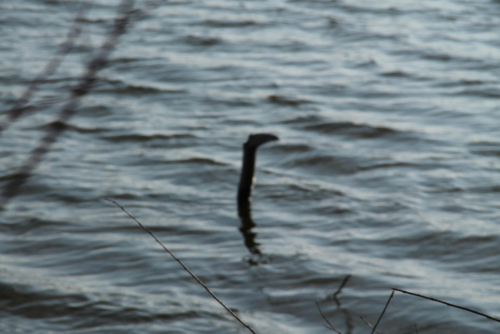 For those interested in “the study of hidden or unknown animals” — that is, cryptozoology — then the International Cryptozoology Museum in Portland is a must visit. The museum is the product of Loren Coleman, who has spent years collecting specimens, artifacts, and replicas relating to lake monsters, sea serpents, yetis, and even Bigfoot. This delightfully wacky museum is certainly a blast to wander, whether or not you consider yourself a true believer. 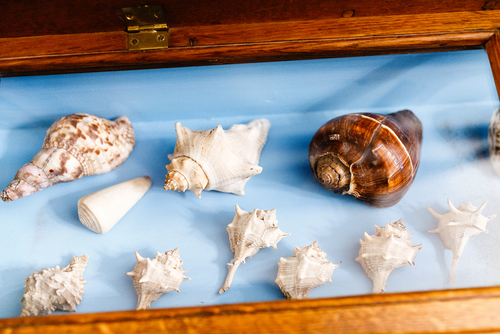 The Kenneth E. Stoddard Shell Museum is the brainchild of a World War II navy man, who collected myriad seashells while serving in the South Pacific. When Stoddard was diagnosed with cancer, his son Lee promised to protect his shell collection by placing them in a museum. This is that promise. The Kenneth E. Stoddard Shell Museum is housed inside a picturesque covered bridge located on the Dolphin Mini Golf premises. It is credited as one of the world’s largest privately owned shell collections, and contains everything from lobster claws to polished pearls. 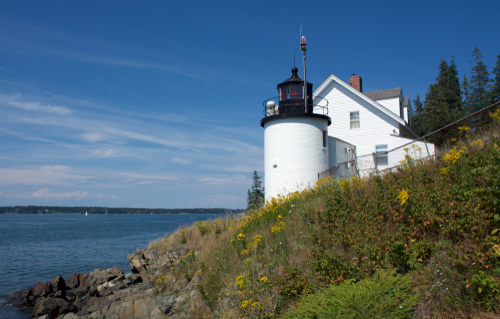 The town of Vinalhaven is probably exactly what you expect when it comes to coastal towns in Maine. Though located slightly off the beaten path, Vinalhaven welcomes its fair share of visitors keen on experiencing life in a quaint fishing village. Still, few of these visitors take the time to walk the winding trail that leads along the rocky shore toward Lane’s End Preserve, a gorgeous preserved area with beautiful natural scenery. 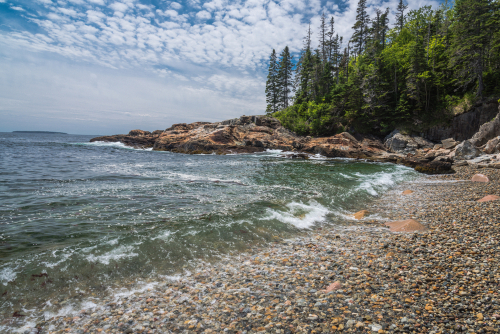 Acadia National Park, arguably the crown jewel of Maine’s many interesting sights, is chock full of beautiful scenery. And so it’s to be expected that some of its offerings get lost in the crowd. Such is the case with Little Hunters Beach, a hidden beach situated approximately three miles past Otter Point, just off the Park Loop Road. Some wooden stairs lead down to the rocky crescent-shaped beach, which visitors who take the time to find it are likely to have all to themselves. 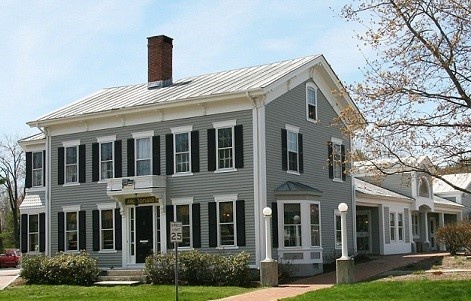 While we wouldn’t typically recommend a fast food restaurant, the McDonald’s in Freeport is a notable exception. When the town wouldn’t allow the burger giant to build one of its traditional structures complete with the golden arches, McDonald’s found a creative solution. They purchased the Gore House, an 1850s mansion, and renovated it to house a restaurant. It’s a literal McMansion! The inside of the house looks like an upscale tavern, but serves the same burgers and fries that we love. 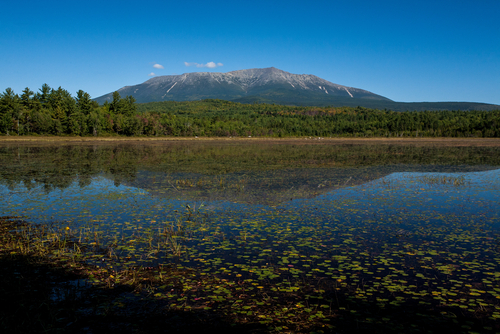 Maine is well known for its beautiful natural landscape, so it might come as a surprise to see the state’s highest peak included on our list of underrated attractions. While daytrippers to Mount Katahdin are many, few take the time to camp or hike the peak’s most worthy trails. Dubbed “the greatest mountain” by the Penobscot Indians, Mount Katahdin is worth the time it takes to hike one or more of its many trails. Remote campsites can be booked throughout Baxter State Park for those who want to spend more time (trust us, you’ll want to spend more time!). 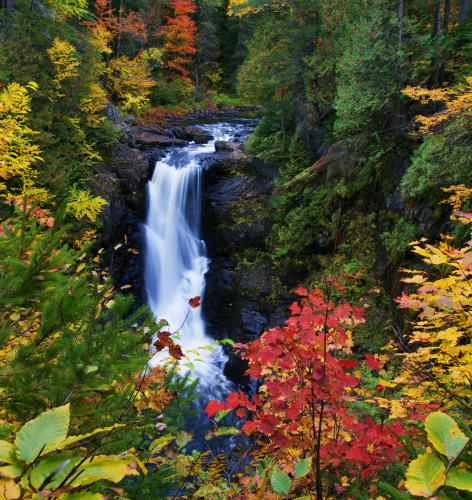 Located in central Maine, the town of West Forks is home to Moxie Falls. Called “the momma of all waterfalls in Maine,” Moxie Falls is a beautiful, yet underrated sight to take in. Getting to the waterfall requires just a short hike, though the trek is likely to make you feel as if you’ve landed in the middle of nowhere. 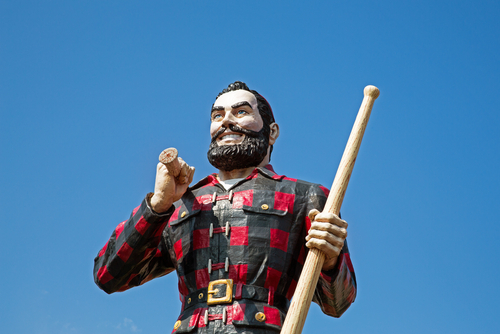 Head to downtown Bangor to catch sight of Paul Bunyan! This 31-foot statue has graced this spot since 1959, and is said to mark the city as the giant’s birthplace. At the very least, this particular Paul Bunyan statue claims to be the tallest of its kind in the world. The statue has become a Maine cultural icon, and was even mentioned in the novel It by Maine native Stephen King. 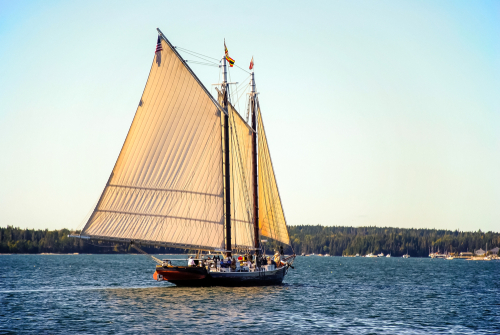 If you’ve spent any time at all in Maine, then you know how important the state’s maritime past is to its history and current culture. To learn more about Maine’s maritime traditions, stop in at the excellent Penobscot Marine Museum in Searsport. The museum is a major part of the community here, and often hosts events, lectures, and workshops. Its collections are many, and are likely to answer most questions had by a maritime-interested visitor. 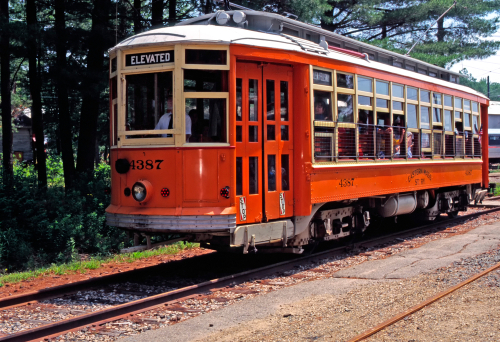 With so much to see and do in Kennebunkport, the Seashore Trolley Museum often gets overlooked. This is too bad, as the fascinating museum is actually the world’s oldest and largest museum dedicated to mass transportation vehicles. Founded in 1939, the museum boasts more than 260 mass transit vehicles from the United States, Canada, the U.K., Australia, Germany, Japan, and beyond. 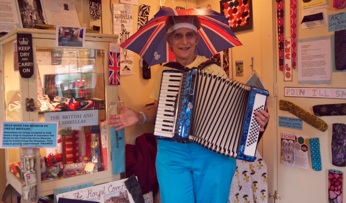 There really is a museum for everything. In this case, the Umbrella Cover Museum is a bit wacky, yet totally worth a stop. Located in Peaks Island, this niche museum is the work of Nancy Hoffman, a long-time Maine resident who found herself with a very large collection of set-aside umbrella covers. When she realized she should do something with them, she created the Umbrella Cover Museum, which Hoffman describes as a place “dedicated to the appreciation of the mundane in everyday life.” Be sure to join a museum tour, led by an accordion-playing Hoffman herself.

Whitewater Rafting on the Kennebec River 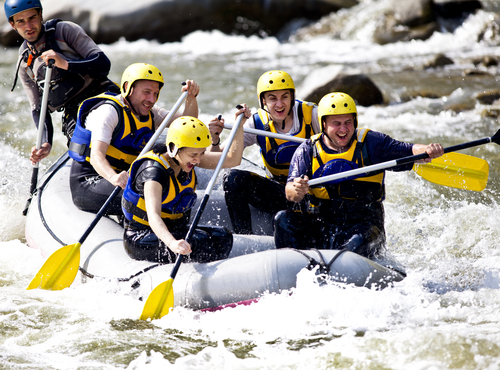 Running for 170 miles through western Maine, the Kennebec River offers visitors plenty of activity options. One of the best ways to experience this gorgeous water way is to go rafting. While the bottom section of the river is perfect for a more leisurely rafting experience, the top section of the Kennebec is best suited for those who are experienced rafters — or who are, at the very least, up for a real adventure. Along the way, rafters will see some gorgeous natural sights not typically seen by those visiting Maine. 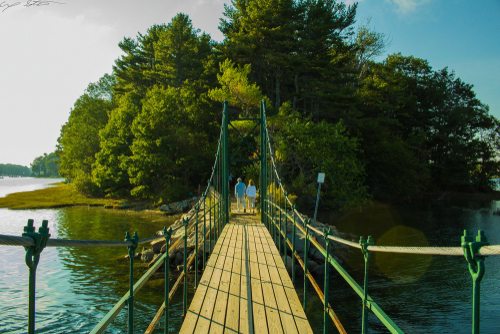 Surely, when one comes across a bridge to cross, wiggly is the last word they hope would describe it. And yet, that’s the name of this bridge in York, Maine. The bridge is actually the smallest suspension bridge in the world, spanning just 75 feet between two green towers. It was named after a group of Girl Scouts walked across it, and declared it “wiggly.” 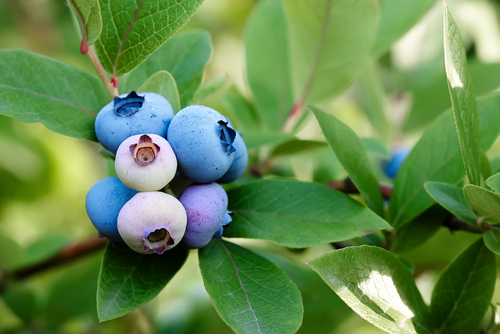 Part roadside attraction, part theme park, Wild Blueberry Land is a stop worth taking when one is near Columbia Falls, Maine. Shaped like a giant blueberry, Wild Blueberry Land is a seven-acre park in which just about everything is — you guessed it — blue. A geodesic dome building houses pastries, breads, sweets, and just about anything else you can make out of Maine’s most famous fruit. A blueberry-themed miniature golf course, u-pick blueberry bushes, and educational tours covering the farming, gardening, and preservation of berries. 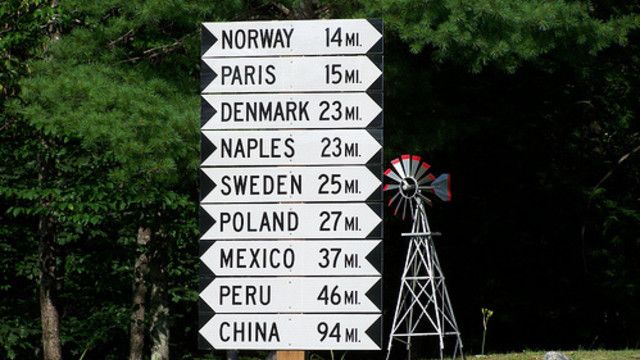 The iconic World Traveler Signpost in Lynchville is worth a stop and a photo. The sign lists a number of cities and countries, along with the miles they are from that spot. But wait…. Poland, 27 miles? Norway, 14 miles? Rather than the Poland and Norway of Europe, or the China of Asia, the places on this sign are actually just towns in Maine and their distances.